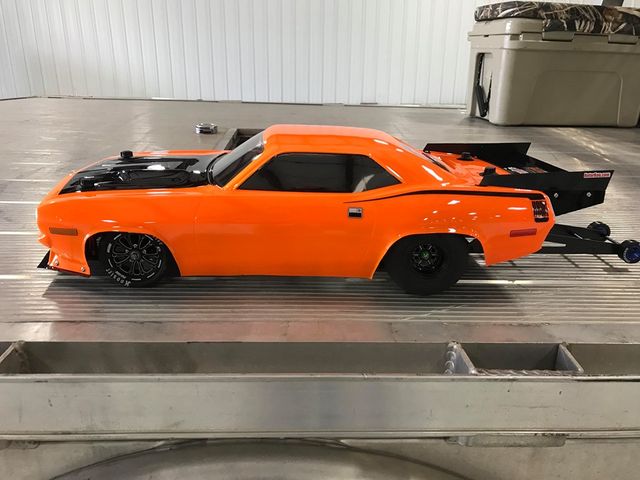 Sustainability. It is a noun by definition that says “the ability to be maintained at a certain rate or level”. You often hear the word used when talking about the use of our planet or a business. Lately, with the explosion of RC Drag Racing I have been using the word a lot when talking to racers and others in the industry alike.

About 3 years ago I started to read where racers were taking a Slash and narrowing up front using Bandit arms and putting short course slicks on the rear and finding a parking lot they could measure out 132 feet and run a race. Next, manufacturers started making more realistic bodies to fit these cars and I started getting more inquiries for lower turn motors and an ESC that could handle them. No Prep RC Drag Racing was born. RC Drag Racing has been around for decades but it was cost prohibitive with custom carbon chassis running 1.6 second passes and parts you could never find. Just like the “rebirth” of off-road racing followed by dirt oval racing the common denominator was one thing…Traxxas Slash. The Slash is cheap and almost indestructible which allows a much more user friendly platform to race on.  Before I talk about No Prep RC Drag racing lets backup a few years for a brief history lesson.
Racers love to push limits. When you push limits you raise prices. I have seen this happen in off road RC racing. The Slash brought a surge of new racers to the track. The class was called Stock Slash but we all know a stock slash tends to roll over and its tires are hard as a hockey puck. Some guys started soaking their tires in Liquid Wrench to soften them up, causing the tires to not last as long but have tons of traction. Others were doing some tricks to the motors. A common problem was blowing plastic caps off the shocks so you had to buy aluminum ones. Hit a tube too hard and break a front hub so tracks said it was ok to run aluminum hubs. Ceramic bearings were soon on the market.  See where I am going yet?  Next thing you know you have a few racers dominating, causing others to just give up. That class that would have 20 or so racers weekly suddenly had 12. Those 8 racers did not buy a buggy or stadium truck to get out of the class, they simply quit. Some moved on to other classes but not soon after there was no Stock Slash class and you never saw many of those racers ever again.

The same thing was happening at dirt ovals. Racers were buying Slashes and putting homemade Dirt Modified bodies on them. The class exploded…until…the same things started happening that was happening at the off road tracks. Softening tires, aluminum parts, motor tricks. Then some tracks started allowing rear adjustable arms. Next you see many custom built carbon chassis hitting the market. That Slash class was now losing racers to the SC Mod class with chassis alone costing upwards of $600. Then they started allowing 4 pole motors in that class but that could be a whole another blog post!  With all this going on, all of a sudden the average racer with the average budget is pushed out of the class. That class that used to have 20 entries now has 12 then 8 then 6 then never enough to have a class and you never see most of those racers again. Some tracks still do have a Stock Slash class and don’t get me wrong there are still a lot of racers today that started out with a Slash but it’s hard to argue that many more are not.

Back to No Prep RC Drag Racing. The Slash created the explosion in drag racing just as it had before in Off Road and Dirt oval racing. And just like before history is repeating itself. Racers with bigger budgets are buying many tires and spending hours softening them up to maybe only make a few runs. Others are pushing limits of electronics and burning some up along the way. Meanwhile there are custom made chassis on the market that will cost you upwards of $600. I am not saying that innovation and progress is a bad thing, I am just pointing out things often overlooked in the hobby.

A couple of the pro’s of the genre is that you do not have to spend countless hours at the track (most meets take less than 3 hours to run) and that the rules are very limited and wide open and finally, you are racing for cold hard cash. Ironically those 3 pro’s are also con’s of the genre. Why you may ask yourself?  In a time where tracks struggle to get entries more and more RC racers of other genres are transitioning to drag racing to avoid long days at a track. This combined with Covid is leaving many tracks struggling to pay the bills. Not many rules cause many to push the limits more than normal and in the process go through alot of equipment. This leads to frustration and frustration pushes many to just walk away. This is especially true of the racers coming from what I call the “Ready to Run Generation”. They are used to buying a Slash, Revo or any other RTR and not really understanding how their vehicle works or how to set it up properly. They then buy a DR10 or Slash and upgrade it to a low turn motor and ESC to handle it and over-gear it causing failure and frustration. Finally, let’s face it, who does not want to race for cash vs a cheap plaque or bowling trophy? Winning cash is great when you win but what about the guy that shows up at every meet pays his entry and never makes it to the final round? I am not saying every racer should be paid back but the payback needs to go further back than top 2 or 4. I read just the other day a cash race that had a $70 entry and you could buy back in for $70 if you lost the first round. The race had around 60 entries but only the top 2 racers got paid. $3500 to win an RC drag race? That’s insane! Why not pay the top 10 drivers? That is NOT sustainable folks.

Now before you go all Bernie Sanders on me think about this for a moment. In the real world when you go to your local dirt track or even a NASCAR or NHRA race, every entry gets back something, even last place (show up money).  When you race for a trophy it’s understood you are not getting paid for where you place at day’s end. When you race for cash, it’s understood that the winner gets more than 2nd and 2nd gets more than 3rd ect. What I am starting to see is just what you see in most other forms of RC Racing, the same racers winning over and over. The difference is that they are not sharing much set up info and they are accumulating cash. Again those 2 pro’s are also con’s of the hobby. The same guy winning week after week frustrates a lot of other racers (personally I don’t mind as i want to learn from him but most don’t think like me lol) and pushes racers away. When you continue to pay high entry fees and not get anything in return you will eventually get frustrated and move on. The other thing I have seen happen over and over is the dilution of classes. When racers get frustrated they tend to start new classes thinking if they start a new class they can place better and get more satisfaction.  This has recently happened in drag racing with a 13.5 class (I am not sure how they landed on a 13.5 motor for a 5lb car but nobody asked me). What you will see now is that the open class that used to have 30 showing up for a meet will suddenly have 20 and less cash to race for, while the 10 will drop to 13.5 and bring in another 5 to 10 entries for the same entries as the open class until 10 racers burn up too many motors and ESC trying to keep up with the fast guys and they will leave the hobby, so what did we really gain?

One last issue with all this education and knowledge. Because they are racing for cash the amount of information being passed around is very limited. I know this first hand. I have reached out to some racers who bought motors from me asking about gearing so I could help other racers when they asked me and the responses I get are vague. One racer told me 2 weeks ago and I quote “why should I tell you what gearing makes me fast so you can go tell 20 others and suddenly I have no advantage”.  Part of me says good for you while the other part of me says dude we are racing toy cars, let’s all work together. I have seen some crazy stuff lately from guys blowing rotors to pieces inside their motor, to flat out burning up motors and ESC’s. I seen where a racer even ran 12 runs in a matter of 80 seconds (according to the date logging) and going for #13 when the ESC gave out at over 280 degrees. Absolutely insane! He claims he did not know he was not supposed to run that many times over and over. He probably did not since there really is no handbook for this drag racing stuff.  Guys like me who have been doing RC for 30 year know better while the new racers pay the price for learning the hard way.

Payout: Pay further back in the field, spread the money around more.  Maybe even have a couple random winners drawn at the end of the race to give that guy in 14th place a chance at some cash to buy tires for the next race.

Costs/Rules: Let’s all work together to keep costs in check. Should a Slash chassis really be racing against a custom built $600 chassis? Probably not.

Tracks: I would love to see more ‘normal’ racetracks be involved somehow. I know that not every track has a parking lot big enough to drag race on. Be creative, think outside the box. Instead of holding raffles on Facebook to help keep the doors open, think of ways to incorporate drag racing into your business.

In closing, I really wanted to put in writing what I am seeing out there. I live RC Racing day in and day out. I really want RC Drag Racing to only get larger and sustain itself. There is that word again, sustainability…..